Flag Day is a day of celebration when all Americans come together to show respect and love for our American flag. It is one of the most popular symbols representing our country.

After the signing of the Declaration of Independence, in 1776, the Continental Congress decided that the country needed a national flag to symbolize the unification of this new country.

The flag’s origin goes back to a seamstress, named Betsy Ross who lived in Philadelphia and who was known for her outstanding needlepoint and flag-making. She was selected by General George Washington to design a flag from a rough sketch he had shown her. The colors Betsy chose were to be red for valor and hardiness; white for purity and innocence; and blue for justice, perseverance and humility. At that time George Washington had shown Betsy a star made with 6 points and she informed the committee that the correct star should have 5 points.

Betsy won her argument and was allowed to make a sample flag using her own ideas as well as to the placement of the 13 stars and stripes. Congress was pleased with her design and they accepted it as the Nation’s standard. Congress authorized its use on June 14, 1777.

Since 1777, there have been different versions of the flag as new states were added into our great nation.

The idea for celebrating our beautiful flag with its own special day came in 1885, when a schoolteacher by the name of BJ Cigrand decided to have his school district in Wisconsin, observe June 14 as “Flag Birthday” in celebrating the 108th birthday of the American flag.

The school was decorated in red, white and blue, poems were read and refreshments of lemonade and cake were served. Everyone pledged their loyalty to their flag.

Cigrand devoted much time to writing letters to statesmen reminding them of the importance of honoring the flag. In 1916 President Woodrow Wilson officially proclaimed June 14 to be observed throughout the U.S. as “Flag Day”. It wasn’t until August,1949, that President Truman signed an Act of Congress designating June 14 of each year as National Flag Day!!!

Flag Day is a special day at Little Explorers when we recall the American Revolution and how brave the colonists were to fight not only for their freedoms but for all future Americans to come.

Red, white and blue are the theme colors for the day and for our festive goodies. The American flag waves proudly at school!!!!!

You might want to make a vanilla sheet cake with red and white icing for the stripes and use candy stars for the states or even use blueberries. Raspberries and sliced strawberries can be used for the stripes as well. A Jell-o mold of either the flag or map of the United States works out very well, too.

If you have the time you might try looking up the Pledge of Allegiance soliloquy given to a group of school children by a devoted and beloved comedian and American named Mr. Red Skeleton, and share it with your own family. 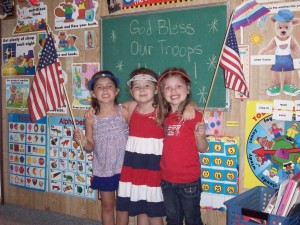 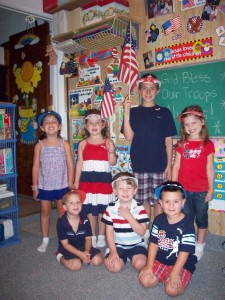