Memorial Day is a special day that has been set aside to honor our American soldiers who died fighting in the service of our country either in battle or as a result of sustained injuries in battle starting with the Civil War, World War I, World War II, Korean War, Vietnam War, Operation Desert Shield/Desert Storm, Operation Iraqi Freedom, Operation New Dawn and Operation Enduring Freedom where our brave warriors are presently fighting in Afghanistan.

Memorial Day, or Decoration Day as it was originally called, was first observed officially on May 28, l868. Flowers were placed on the graves of both Union and Confederate soldiers at Arlington National Cemetery while prayers were recited and hymns sung.

After World War I the holiday was extended to include all honored military personnel who died in any war while serving with the US.

In l971 Congress declared Memorial Day to be a national holiday to be celebrated on the last Monday in May. In December, 2000, President Bill Clinton signed the “National Moment of Remembrance Act,” which designates that a moment of silence be respected at 3PM local time on Memorial Day. At 11AM the U.S. Army Military District of Washington conducts a presidential Armed Forces full-honor wreath-laying ceremony at the Tomb of the Unknown Soldier.

Sometimes Memorial Day is confused with Veterans Day. Veterans Day is the day we set aside to THANK and HONOR ALL the brave and courageous men and women who served honorably in the military, in wartime or peacetime. We thank and show appreciation to all the living veterans for their service along with those who died in action for the unselfish sacrifices and heroism they displayed.

Little Explorers has always been a supporter of our heroic warriors. The children have expressed their love and true feelings for our military through their card writings, drawings, patriotic murals and holiday video shows which were used as both entertainment and recreational therapy to help our military heroes while recuperating at both Walter Reed and Bethesda Naval Hospitals, and over-seas.  Last year Little Explorers became involved with sending murals to the USO.   The children were overwhelmed each time they received a thank you from the military branches for the kind, loving and patriotic work they displayed in their work and actions. An American flag was flown over Afghanistan for them which we proudly display at Little Explorers. Nothing in life is ever to be taken for granted.

Little Explorers was totally honored when we were notified that the San Francisco 49ers took photos with our murals. Joanne Pasternack, Public Relations, wrote that “they love them!! They were adorable!”

Patriotism and respect for our military and country have to be instilled at a young age. I remember growing up in a family of military war veterans and listening to some of the stories they would share with us surrounding WWII. Military photos were treasured and I remember growing up with an enormous sense of pride and love for my country, America. We were taught how fortunate we were to be born and raised in America and what life was like in other European countries. We never lost sight of the opportunities and freedom that we were born with and should never take for granted!!!!!! 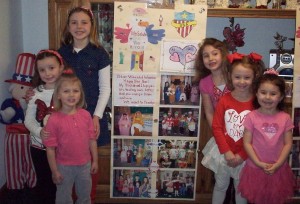 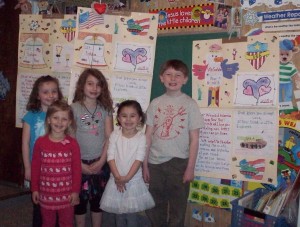 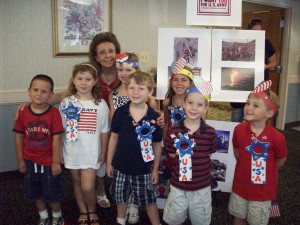 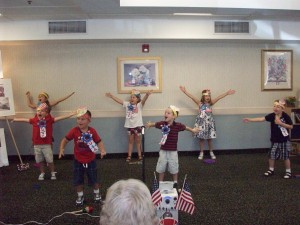